“We are entirely satisfied with him,” Marc Watson says of Miller. “He actually trained us when we were working with another company. When he left that company and moved to Maxine, we followed him because of his excellent attention to detail, customer service, and reliability.”

Yes, they can install or repair waterlines, switch out a toilet and get water flowing again in a clogged sink line. But what distinguishes them from other plumbers in the Rhode Island and southern Massachusetts market is the breadth of their skills.

“We have really set ourselves apart from other plumbers in the area, especially with our pipe lining and hydro jetting work,” says Jim Watson, owner of Royal Flush Plumbing. “By getting into that, we have the market right here. No one else in the immediate area is jetting.”

His son Marc Watson says the extension of their services into pipe repair came after their visit to the 2016 Water & Wastewater Equipment, Treatment & Transport Show in Indianapolis. “At the expo, Source One Environmental demonstrated pipe patch repairs. When we got back, I got to thinking, We could handle that. We’d wanted to try something different. Once we tried that, I thought we could do pipe lining, too.”

So they geared up with specialized equipment and have settled in as the go-to plumbers, jetters and pipe liners in their area.

Jim Watson started his one-man plumbing company in 1991 after immigrating to Providence, Rhode Island. As a fearless, travel-ready, 20-something native of Scotland, Watson had moved to South Africa in 1982 to accept a journeyman plumber opportunity. After nine years there, he headed back north and landed across the Atlantic Ocean in Rhode Island.

He started out cleaning drains, calling his company Royal Flush Plumbing. “I just thought it was catchy,” he says of the name. His logo features the five cards that make up the winning poker hand plus a slogan, “The Best Hand in the Game.”

A secondary marketing angle alludes to his heritage as a native of Scotland: On each truck are photos of his son Marc Watson in a plaid kilt holding a big pipe wrench instead of bagpipes.

The company doesn’t do any gimmicky promotions related to the company name. Nobody makes service calls in kilts. But the company is working on getting its name in front of potential customers. “We sponsor a baseball team and, soon, a football team,” Marc Watson says. He is starting work with a marketer to build the company’s social media and Google presence.

Watson joined his father in the business in 2006 when he decided he would rather work with his hands than pursue a marketing major in college. Shortly thereafter, a business location opened up across the state line in Seekonk, Massachusetts.

Its technicians are certified in both Massachusetts and Rhode Island and move back and forth across the state line in response to customer calls, with about half the calls originating in each state. Though Jim Watson began as a residential plumber, Royal Flush Plumbing also does work for restaurants and facilities on college campuses. After Marc Watson joined the team, the company solicited additional jobs from colleges. Today, the work is evenly split between commercial and residential.

The two-man team has now grown to four technicians and one office worker. Building the team hasn’t been easy. “Finding good people is hard,” Marc Watson says. Keeping them is just as difficult. 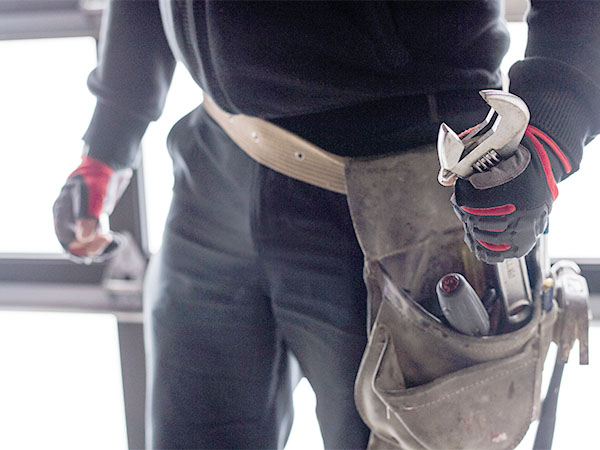 This especially is true for a company aspiring to excellence in its work and performance.

As Royal Flush Plumbing states on its website, the company “offers the personalization and attention to detail of a small company, while also offering the professionalism and quality of a big company.” To help sustain that standard, Watson says he and his father are advocates of “open-door communication” with employees, including conversations on the company dime over lunch and during coffee breaks.

“We have found if we treat our employees right, they will respond,” Watson says. “We make sure each employee knows what is expected of him to maintain our standard. My dad is the face of the company. He always meets with customers, not only to close a deal, but to make sure they are happy.”

At 31, the younger Watson is comfortable with new technology and always is ready to utilize it. He says he likes all of the company’s work, but finds operating the pipe inspection, jetting and lining systems particularly satisfying. “Pipe lining is a challenge, and we like the challenge. It also gives us a lot of gray hairs.”

Tools of the trade

The company utilizes the Quik-Shot CIP lining system (Pipe Lining Supply), partly because the system’s propulsion unit, heater and rollers are relatively compact and can be easily carried into a basement or to a rooftop for vertical lining. MaxLiner USA felt inserts are the company’s choice of lining material, usually the Max FLEX 4D. The felt tube is impregnated with resin and unfolded into a pipe using air pressure (5 to 7 psi) to create an inner surface up to 4.5 mm thick. Hot air is then blown through the lined pipe for an hour to harden the resins and create a new surface.

The thickness of the new pipe can vary by a millimeter or so, and the felt inserts can range from 4 to 8 inches in diameter. “We’re very happy with the MaxLiner system, and we’re looking at equipment that will let us do pipe up to 15 inches in diameter,” Watson says.

The usual application of the system is in repairing collapsing lines running from a house to a sewer main. Royal Flush Plumbing gets the call when homeowners start dealing with sewage backing up into the home. The company’s longest lining project to date occurred last summer — a 750-foot-long trailer park sewer line. The Royal Flush Plumbing team incrementally inserted a MaxLiner felt tube into the old line, 150 feet at a time.

To remove roots and scale, Royal Flush Plumbing frequently calls upon the Maxi and Mini Millers from Picote Solutions. The tools’ grinding chains thoroughly scour the interior of pipes. “Roots are the biggest problem, particularly in residential work,” Watson says. The invasive roots of elm and maple trees are the bane of underground pipe in tree-covered New England. “In commercial work, scale is the bigger problem. The Picote Cyclone is fantastic for descaling pipes.”

If the better course seems to be blasting through sludge or another material, Royal Flush Plumbing brings out the Spartan Tool Warrior trailer hydro jetter. The unit’s 67 hp diesel engine and triplex pump can produce up to 19 gallons a minute at 4,000 psi, though 2,500 psi will clear away most obstructions. Most pipes jetted are 4 to 6 inches in diameter, but the equipment is sometimes used in pipes as small as 1 1/2 inches in diameter.

Company techs are regularly trained on equipment, including the hydro jetter. “Anytime we have to run a jetter, we let the guys operate it so they can get comfortable,” Watson says. “We look for hands-on training opportunities on site. Training on an actual job site is a lot different than in a shop.”

All of this trenchless work requires visual pre- and post-inspection to know what awaits the team underground and what impact the line-cleaning process has had. Royal Flush Plumbing techs depend on a RIDGID SeeSnake plumbing camera connected to a CS12X monitor to eyeball the condition of buried pipe. A couple AnySun cameras are employed in pipes as small as 2 inches.

“We are always looking at new equipment in the market,” Watson says. He’s currently tempted by a new UV-light liner-curing system that claims faster setup and simultaneous camera inspection in one pass through a pipe. “I’m looking at it, but I’m just not entirely there yet.”

Never underestimate the value of personal service and customer care. Jim and Marc Watson of Royal Flush Plumbing can attest to that from both sides of the equation — as service providers and as customers.

The Massachusetts firm has made a name for itself in the Rhode Island and southern Massachusetts market by expanding its bundle of services beyond the traditional plumbing portfolio. While the Watsons readily point to the breadth of their services — from unstopping toilets to lining deteriorating sewer lines — for distinguishing them from most of their peers in the area, they say something else is satisfying customers and bringing in return business

“Our customer support separates us from the competition,” says Marc Watson, Jim Watson’s son, who joined the business in 2006. “We always make sure a task is totally explained, step by step. We give them options, always — there being no end-all solution to a problem. We make sure a customer is comfortable with what is going on and what is being done and why.”

This level of communication and follow-up regularly garners the company positive feedback. It works both ways. The Watsons express their appreciation for similar attention paid them by the representative of a pipe lining products company, MaxLiner USA. The rep, Chad Miller, interacts with them the same way they do with their customers.

“We are entirely satisfied with him,” Marc Watson says of Miller. “He actually trained us when we were working with another company. When he left that company and moved to MaxLiner, we followed him because of his excellent attention to detail, customer service and reliability.”